On a sweltering summer Sunday in June, Z~Oenology, along with longtime Sunset Hills Estate Club members Kathy and Craig Stuart (who have visited over 200 Virginia wineries) and vineyard owner Mike Canney, were shaking their chins in the pavilion of the historic Wenner Agricultural and Wine Estate. Mike called me to give me a scoop.

What journalist can resist the prospect of a full-scale warning? But the possibility of a super-secret in the winery was all the more elusive. I like to guess. So my first thought was that he sold the cellar. 50 West, Sunset Hills’ sister winery in Middleburg, had been on the market for some time. No.

Mike, who used to race, owned ten cars, a 1953 Chevy 3100 truck and a 1940 John Deere Model A tractor, so chances were good he had added to the collection. It wasn’t exactly news – at least not for a wine column. So my second guess was that he bought another cellar. He had kept an eye open to develop a new property. No, not a new cellar.

Three times is the charm! Sunset Hills Vineyard has been voted Loudoun’s Best Winery of 2022 by Loudoun Times readers for the third year in a row. Considering there are 50 and boasting some wonderful wineries and tasting rooms in Loudoun County, this triple tour was no small feat.

Interviewing Mike about the latest Canney coup (50 West had made the 2022 Governor’s case for their 2019 Ashby Gap red mix), I asked him if he’d ever thought about selling the whole shebang and sailing around of the world – or a hobby like that than thirty- plus years of hard work and starting 13 businesses pays off. Mike replied that he enjoyed the agricultural aspect of owning the vineyard. But that at this point he wanted to own the cellar, not work it seven days a week all year round.

Little did I know as we were discussing how to celebrate Sunset’s hat trick that a deal was waiting in the pipeline to sell not just 50 West but Sunset Hills Vineyard and all affiliated properties as well. I’ve sworn to keep the Best Loudoun Winery trifecta a secret until the winners are officially announced to the public. Mike kept the wineries’ deal quiet by way of a nondisclosure agreement attached to the sale negotiations.

We separated when Mike had to resume his activities. The next day I received a text from Diane and Mike telling me that they had sold both 50 West and Sunset Hills Vineyards. After the shock subsided a bit, curiosity set in. The following weekend, I was introduced to the disarmingly charming and graciously unassuming new owners, Katie and Chris Key.

Chris grew up in Sterling. Katie is from Modesto, California. The couple met at a wine tasting in Mendocino. Both enthusiastic oenophiles, the vineyards were a must-visit destination in both east and west. Once in 2009, while visiting the DMV, Chris took Katie to Sunset Hills for their first date at a Virginia vineyard.

The Keys were impressed with the caliber of wine, often revisiting Sunset Hills with friends and family when they permanently moved to Virginia in 2012. Just as Mike and Diane got into the winemaking game, when selling of their technology. Katie and Chris began looking for suitable properties to start their own vineyard and winery.

Building a vineyard brand and planting a vineyard from scratch takes years. Z~Œnologie planted a plot of Viognier several years ago, the fruit of which is only now bottled. (Try the 2020 Sunset Viognier. It’s quite pleasant!) Katie and Chris looked to Fauquier and Rappahannock but hoped to stay closer to home in Great Falls and Bluemont. And they didn’t want to wait five or six years to build and have vines that brought forth fruit ready for the press. 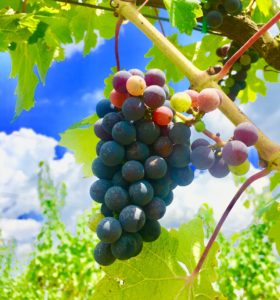 Sunset Hills appealed to the Keys on many levels, both sentimental and practical. Mike explains that sustainability and pay-forward, growing grapes for the highest good, was paramount to establishing both wineries. Sunset Hills is solar powered, producing wine from water kissed by sunlight, from vine to wine. Rooftop solar panels generate almost 75% of their electricity demand. And SHV and 50 West each have two car charging stations.

The Canney’s progressive environmental proactivity was a tipping point for Katie and Chris. As Mike notes, “Loudoun County in particular, but the greater Washington, D.C. area included, is populated by well-educated residents who value our efforts in sustainable growing practices and reducing the carbon footprint of wine production.Wine has been made for thousands of years, but the industry is only beginning to catch up with the effects of climate change, advocating for minimizing environmental impact – from vineyard management and wine making bottling and distribution.

Canney continues, “Agritourism has become big business. People like to see fruit grow from bud break to harvest. They want to be part of the experience, to meet the people who grow the grapes and blend the wine. Our Vigneron d’un jour events have always sold out. And our award-winning winemakers have all started their own cellars or run wine production at some of Virginia’s most prestigious wineries. We favor authenticity and are extremely proud of our vintages from the estate. 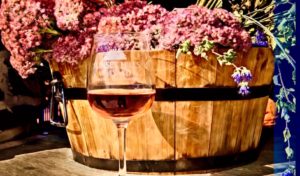 The listing of the 50 West property came with a contingency that wine production would remain dependent on Sunset Hills for three years to deplete stored inventory. Wanting to get started, Katie and Chris made Diane and Mike an offer they couldn’t refuse for all of their properties in Virginia and both farming and wine businesses.

Throughout July, the Keys hosted wine club nights for members to be introduced to “new Diane and Mike,” as they were affectionately known at first. With five wine clubs and over 2,000 members, Katie and Chris had plenty of hands to shake and names to remember.

At the Estate Club event (the original and oldest SHV ​​wine club), Diane and Mike introduced Katie and Chris as the perfect partners to continue the legacy the Canneys started over twenty years ago when They planted their first vines in 1999 and painstakingly restored the 1800s built and remodeled Amish Barn that houses the SHV Tasting Room. Both Chris and Katie are extremely business savvy, with Katie rounding out the power couple’s management chops with her PR expertise. They plan to improve production, improve the winery experience, and build the brand bigger and better than ever.

The Keys are ready to roll out the 2021 bottled vintages crafted by winemaker Jason Burrus and poured by the SHV and 50 West team with the seasoned leadership of Wine Ambassadors David Parker (Certified Sommelier) and Audrey Siler (WSET Certified), Manager of Tasting Room Aubry Fisher, Wine Clubs Manager Kevin Donley and Vineyard Manager Corrigan Herbert. Let’s raise a glass of Rosé (Sunset Hills or 50 West) in Canneys and the Keys. Congratulations to all. And…. Cheers!

Z~Oenology note: Stay tuned for the latest red blend label from Sunset Hills called The Elegant Lady, the vino finale of the Canney Vineyard Dynasty era. Whoops ! Was that supposed to be a secret?