When people reach their 40s and beyond, their near vision begins to deteriorate. For many people, increasing the font size on a phone or maximizing the brightness on a computer is the only way to be able to read text.

This condition is known as presbyopia and affects approximately 128 million people in the United States and over one billion people worldwide.

In late 2021, the United States Food and Drug Administration approved a new eye drop drug to treat presbyopia. As an optometrist, I was initially skeptical.

Before the release of these eye drops – called Vuity – people would need glasses, contacts or eye surgery to relieve presbyopia. But after learning how these eye drops worked, I realized that for many people they could offer an easier and safer way to see clearly again.

The pupil and lens are important parts of the eye involved in focusing on objects. (ttsz/iStock/Getty Images)

How the eyes focus

Many parts of the human eye interact with incoming light to produce a clear image.

The first thing the light hits is the cornea, the transparent outer layer that initially bends the light. Next, light passes through the iris and pupil, which can shrink or grow to let more or less light enter the inside of the eye. It then moves through the lens, which further bends the light and focuses it precisely on the center of the retina. Finally, the light signal is transferred to the optic nerve at the back of the eye, for the brain to interpret as an image.

To produce a clear image, your eyes must adjust to the distance of an object. Your eyes go through three main steps to focus on objects close to your face: your eyes point to the object you want to look at, your lenses change shape, and your pupils constrict.

Once you have aimed your gaze at what interests you, a small muscle in the eye contracts, which changes the shape of the lens to make it thicker. The thicker the lens, the more the light deforms as it passes through. At the same time, your pupils constrict to block some of the incoming light from other objects in the distance.

When light bounces off an object and enters your eye, the rays of light in the center provide a clear image. Blocking scattered light by constricting the pupil helps sharpen the image of nearby objects.

You can simulate this process using a camera on your cell phone. First, point the camera at something in the distance. Next, move your thumb into the image, holding it about 6 inches away. Your thumb will start out blurry, but as the camera lens changes shape, your thumb will become sharp. 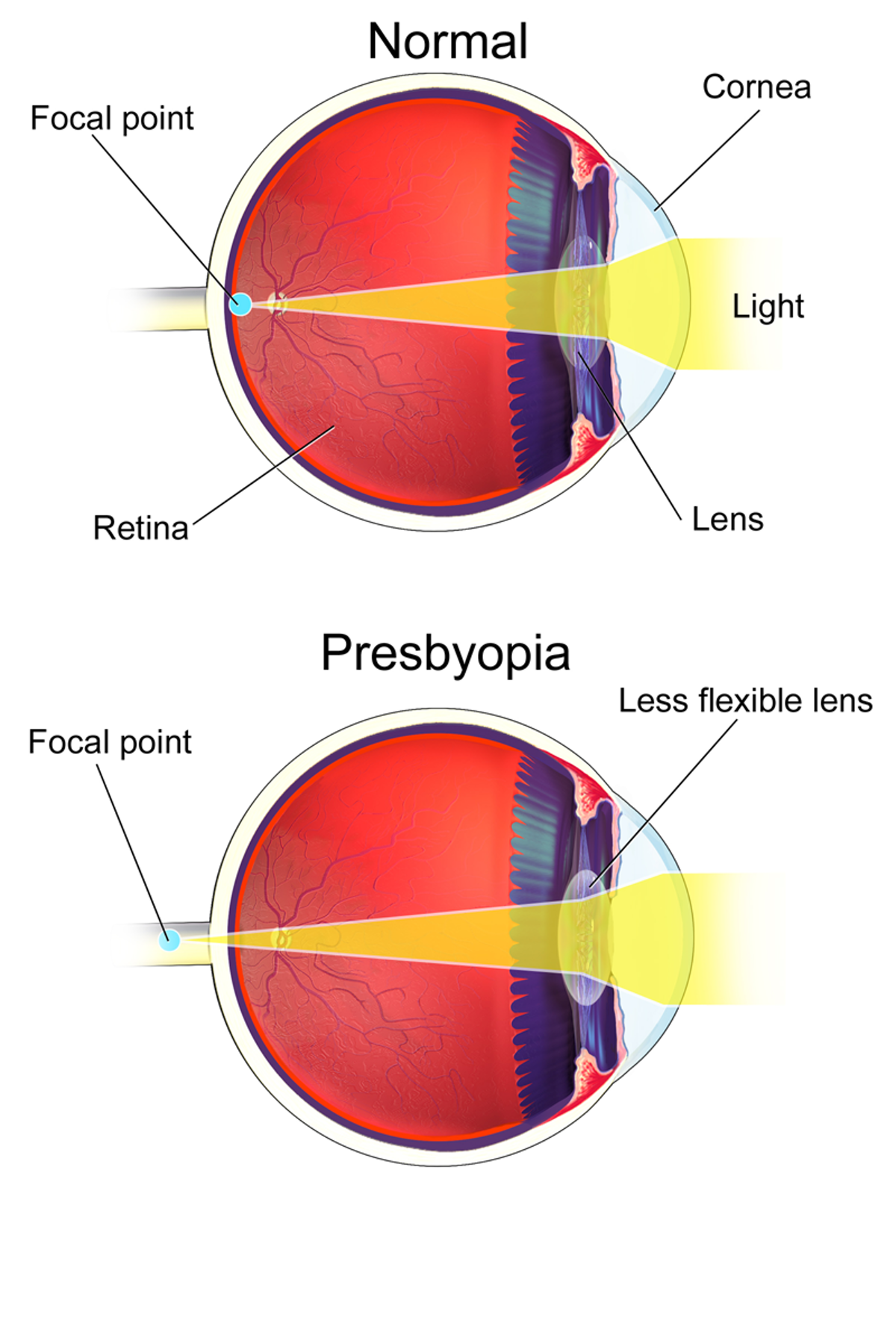 IMAGE: Presbyopia stiffens the lens of the eye, and when a person cannot bend their lens as easily, they are unable to focus incoming light on the correct part of the retina and images appear blurry.

Presbyopia is the inability of the eyes to focus on near objects, resulting in blurry images. It begins when people are in their 40s and progresses until it plateaus around age 60.

Researchers know that age is the main driver of presbyopia, but there is ongoing debate about the mechanical causes at its root.

Whatever the cause, the result is that when looking at nearby objects, people’s eyes are no longer able to bend incoming light enough to direct it to the center of the retina. Instead, light is focused to a location behind the retina, resulting in blurred vision.

How do eye drops work

Remember that there are two main things the eye does to focus on near objects: the lens changes shape and the pupil gets smaller. Since presbyopia limits the ability of the lens to change shape, these eye drops compensate by narrowing the pupil.

Constricting the pupil reduces the amount of light scatter. This causes light entering the eye to be better focused on the retina, creating a wider range of distances where objects are in focus and allowing people to see both near and far objects clearly.

After you put the drops in your eyes, it takes about 15 minutes for the active ingredient, pilocarpine, to start working. Pilocarpine is a drug that was first discovered in the late 1800s and can treat conditions such as glaucoma and ocular hypertension. The effect on the pupils lasts about six hours.

Smaller pupils mean less light enters the eye. Although this is not a problem during the day when there is plenty of sunlight, it can cause difficulty seeing in low light conditions. Besides these disadvantages, the most common side effects of the drops are headaches and red eyes. 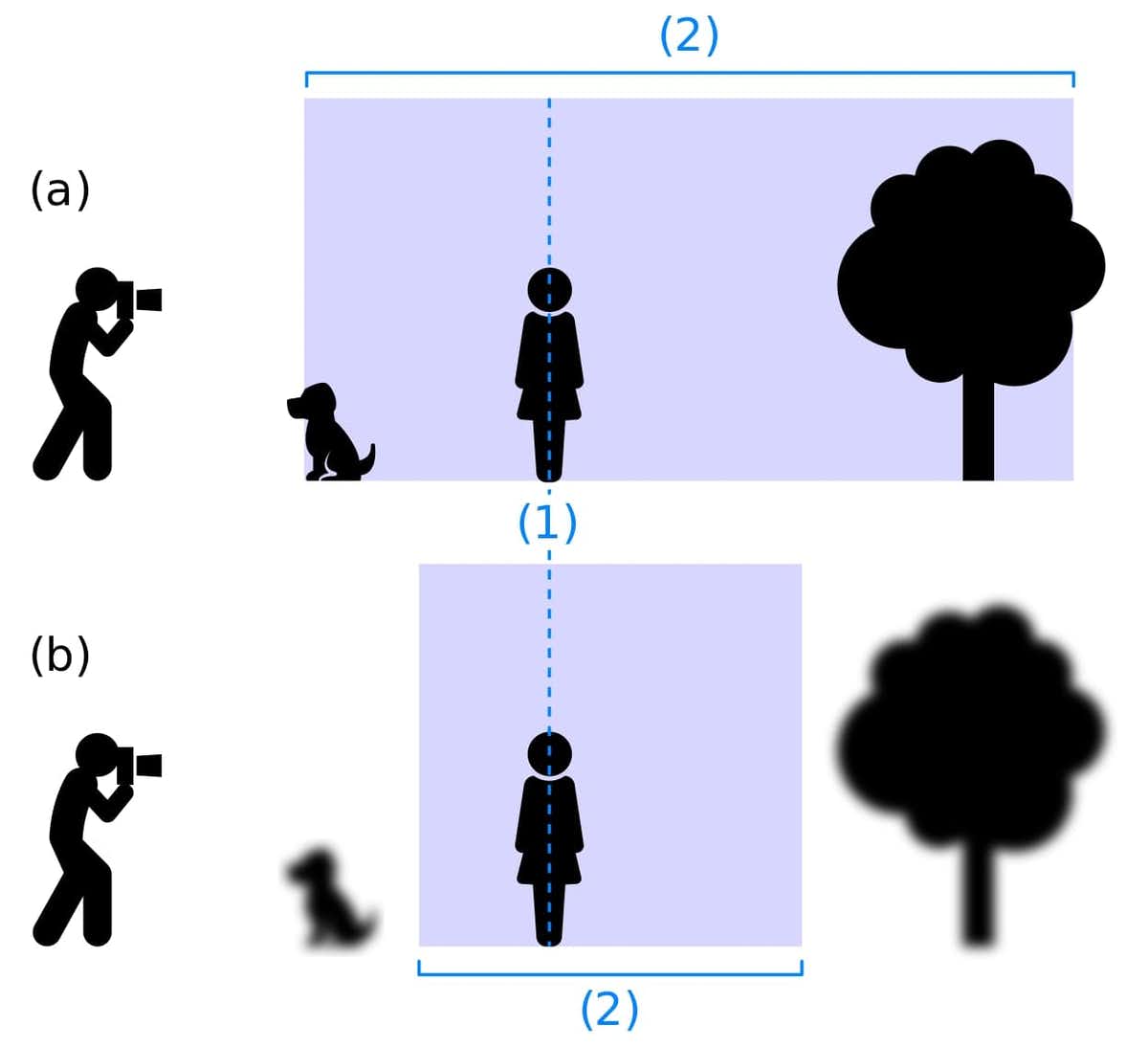 Presbyopia in the future

Vuity is currently approved for once-daily use in each eye. One bottle will cost around $80, requires a prescription, and will last almost a month if used daily. For some people, it could be a great alternative or complement to glasses or surgery.

While Vuity may be the first FDA-approved eye drops to treat presbyopia, researchers are investigating a number of other approaches. Some are developing eye drops containing non-steroidal anti-inflammatory drugs to help constrict the pupil – similarly to Vuity.

Other teams are investigating drops that soften and reduce the weight of the lens to promote easier focusing. Finally, some early research has shown that pulsed electrical stimulation of eye muscles can help strengthen them and improve people’s ability to bend their lenses.

The future of presbyopia treatment is exciting as researchers work on many potential ways to overcome this universal condition of old age. For now, Vuity – while not a magic bullet for everyone with presbyopia – is an innovative option and may be worth talking to your eye doctor about.

This article is republished from The Conversation under a Creative Commons license. Read the original article.

How to get glasses or contacts without a recent prescription

Arlington Park auction: Everything from horse blankets to drinking glasses are on sale