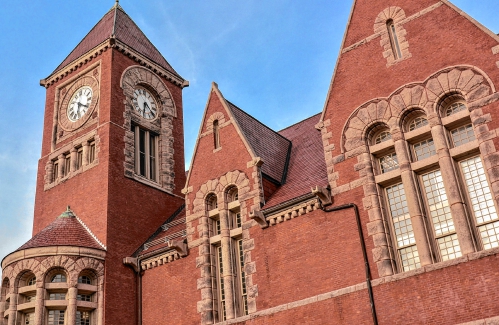 AMHERST – Amherst’s six outgoing councilors were celebrated at the last city council meeting of their tenure this week, with a virtual celebration of their service that included toast with champagne glasses filled with sparkling cider.

To mark the conclusion of just over three years of the first municipal council, inaugurated on December 2, 2018, each councilor received a bag of goodies, valued at less than $ 50, including a framed photo of the 13 members of the advice.

“It is important to recognize the advisers who served on the inaugural board,” said Chief Executive Officer Paul Bockelman.

Council President Lynn Griesemer raised the toast and congratulated her colleagues for their tremendous commitment, adding: “We flew the plane during its construction”.

The departing advisers are Sarah Swartz, Steve Schreiber, George Ryan, Evan Ross, Darcy DuMont and Alisa Brewer. “Take advantage of the enormous amount of time that you are about to acquire,” Griesemer said.

For each of those who left, two advisers were chosen to briefly congratulate their accomplishments and what they brought to the board.

Each departing Councilor was also able to provide feedback on their time spent on Council.

Brewer, who began his city-wide service on the school committee in 2002 and has continued to serve on the board of directors and city council, has used his vast experience to offer advice. Part of this advice is to ensure that councilors engage the public in a variety of ways and to remember that public comments at meetings should not guide decisions.

The event will feature music, a spiritual libation ceremony and a Kwanzaa story.

Participants can also join via Zoom.

A new clothing store has opened as a pop-up store in Riverside Park Mall on Montague Road in North Amherst.

Occupying space last used by a drugstore and before that by a video store, The Closet was previously an upscale online clothing store.

“There is something for everyone in the boutique, with each piece unmistakably unique,” ​​said Andrea Marion, the founder of the company, in a statement.

Next spring, the company will be relocating to the North Square development on Cowls Road, where it will be located near Provisions and the Mill District General Store.

Valley Eye Radio in Springfield, a nonprofit member of the Massachusetts Audio Information Network, is looking for volunteers to read Amherst Bulletin articles for people who are blind, visually impaired and those who are unable to read on their own due to a disability or other health problem. .

Volunteer work can be done remotely or in the studio at Springfield Industrial Park on Federal Street.

Pelham resident Tony Maroulis, a regional leader in economic development tourism and the arts, has returned to the University of Massachusetts as executive director of community and strategic initiatives. Maroulis spent the last year working for WD Cowls Inc. after a six-year stint with UMass as Executive Director of External Relations and University Events.

Nancy Buffone, associate vice-chancellor for university relations, said in a statement that UMass wants Maroulis back.

“Tony will be focusing on community relations work and a variety of special projects,” Buffone said. “He has a deep understanding and appreciation of the issues facing campus and local communities. “

Maroulis, who also served as Executive Director of the Amherst Region Chamber of Commerce, has served on numerous nonprofit boards and committees and currently sits on the boards of Leadership Pioneer Valley, United Way of the Franklin and Hampshire Region. , the Amherst Business Improvement District and the Amherst Town Center Foundation.

He lives with his wife, Nora, and son Mickey, 17. His daughter, Sofia, 21, studies art history at UMass.

Scott Merzbach can be contacted at [email protected]