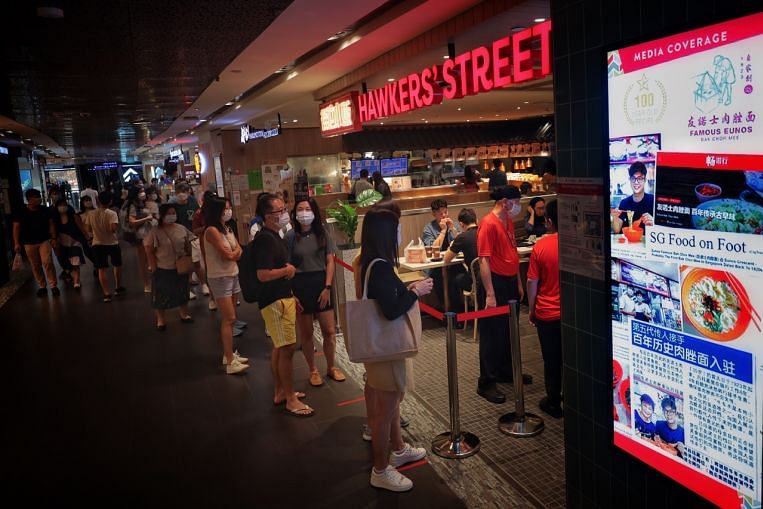 SINGAPORE – Retail outlets also benefited from the relaxation of restaurant rules this week after meals were allowed to resume in groups of two on Monday, June 21.

As expected, various food and drink outlets said on Saturday that business had improved even though they had not reached full seating capacity.

Ms Beh Phei Ling, 29, manager of Rumah Sayang in Jem, said the restaurant had seen a 15% increase in the number of walk-in customers since day one of phase three (heightened alert). The Straits Times reckoned it had at least 10 customers by noon, filling a third of the store’s capacity.

The number of customers in Rumah Sayang fell by around 60% during phase two (heightened alert).

Although relieved that business has picked up, Ms Beh said the jump remains modest and limited.

She said: “People can still be cautious and afraid to visit the mall due to the number of Covid-19 cases.”

Jem and Westgate were shut down from May 23 for two weeks, after 10 cases were linked to them. Ion Orchard was also shut down for four days from June 12, after three workers tested positive for Covid-19.

Some F&B establishments remain in favor of the cautious approach to dining on site.

Ms Samantha Toh, 23, branch manager at Baker’s Brew Cafe in Paragon, said: “It’s good that we’re being more careful instead of going back to five people (per meal group).”

But F&B outlets are also eagerly awaiting a further relaxation of restaurant rules.

Ms Beh said, “The two-person rule might not be enough from a business standpoint. Families might not want to have dinner because they don’t want to be separated.”

Ms Doreen Ong, manager of Hawkers’ Street at Ion Orchard, said the two-person rule and the safety distance measures had reduced the number of seats from 60 to 32, resulting in a low turnover of staff. clients.

She said: “Customers can wait 30 to 40 minutes, and some might leave if the wait is too long.”

Some F&B outlets, like PappaRich in Westgate, have had to deal with difficult customers.

Ms Annie Soh, 64, PappaRich’s supervisor in Westgate, recalled that she had to turn down a group of three friends who were trying to have dinner. Some customers would even scold the staff if they were reminded to put on their masks when not using. food, she said.

“My heart hurts and I have a huge headache every time customers are not helpful. I even had to print out the safety management measures to remind customers of the guidelines,” he said. she declared.

Mr John Tanjutco, 33, a manager at Prada in Paragon, said the number of walk-in customers has increased from 35 per day to around 65 to 70 per day this week, sometimes even reaching 100. “Les business has improved so much. a ghost town before. People are in the mood to shop again, ”he said.

Mr Davis Chiam, 28, a store manager at Charles and Keith in Ion Orchard, said he now had around 200 customers a day on weekdays, 50 more than before dinner was allowed.

He said: “Customers think that without dining there, there is no point in going to the malls.”

This is especially true for malls like Ion Orchard which are not located in the neighborhood, he added.

Ms Arina Ali, 28, manager of Smiggle stationery and school supplies store in Jem, said the number of walk-in customers had increased by almost 50% since Monday. She attributed this leap not only to the ripple effect of customers who dine there, but also to the imminent opening of schools after the June break.

As it was the last weekend of the school holidays, many families took the opportunity to eat.

Ms Jasmine Tan, 45, who had lunch at Ramen Nagi in Ion Orchard with her husband and two sons, who are in high school, said: “I feel bad that we weren’t with our children. I owe them a culinary experience. “

Polytechnic student Yasmin Razak, 17, was with her family at Pepper Lunch in Jem.