There are two ways to get to Cape Verde, by sea or by sky. Be that as it may, one is surprised by the landscape of immense rocky masses springing from the navel of the Atlantic before setting foot on land. Depopulated until the mid-15th century, the volcanic archipelago is made up of ten islands, nine of which are currently inhabited, with unique features in each – some more touristy, like Sal, others more rural, like Santo Antão – and a version of Kriolu Kaboverdianuwhich is not the official language (Portuguese occupies this place), but which is by far the most spoken.

São Vicente is the second most populated island in the country and forms the northern island group called Sotavento, along with Santo Antão, Santa Luzia, São Nicolau, Sal and Boa Vista. Its largest city, Mindelo, has a port vocation and has historically been the point of departure and arrival of people and goods. Marked by traffic, the city is a place of passage and intense cultural exchanges. It is also home to the first museum built in the country, the National Center for Arts, Crafts and Design – CNAD. 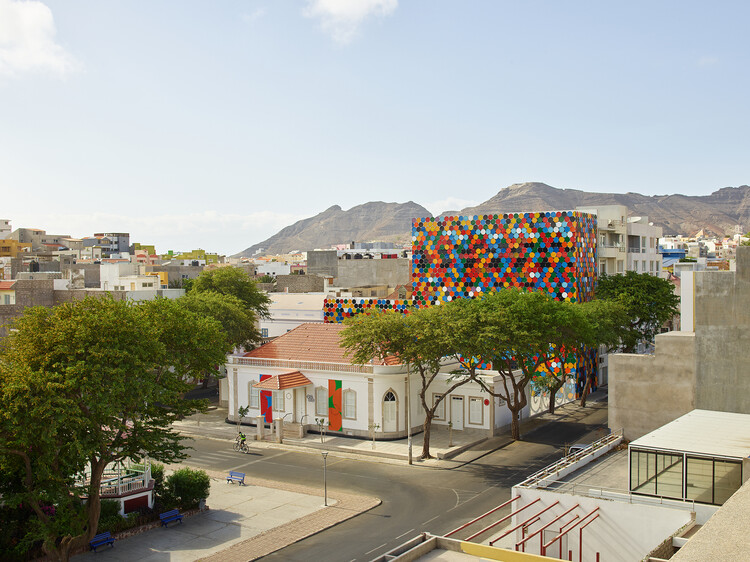 Inaugurated at the end of July, the new CNAD is the result of a long process that has benefited from the support of the Ministry of Culture and Creative Industries of Cape Verde and the federal government. Besides the new museum built from scratch, designed by the local firm Ramos Castellano Arquitectos, the project also includes the rehabilitation of Casa Senador Vera-Cruz, one of the oldest buildings in Mindelo, started in 2019.

The project was fully funded by the government of Cape Verde and cost 120 million Cape Verdean escudos (about US$1.1 million). With a collection space, exhibition halls, a library and a space for artistic residences, the National Center for Arts, Crafts and Design wishes to become a benchmark as a platform for sustainable cultural development and promotion. “We sowed utopia to harvest a whole new verse,” says Irlando Ferreira, Director General of CNAD, after years of working to manage the demands and needs of government agencies, artists and artisans.

If today the institution extends its arms to the arts and design, it keeps its feet firmly anchored in craftsmanship. It emerged in 1976 as Cooperativa Resistência, a group of artists and teachers led by Manuel Figueira, Luísa Queirós and Bela Duarte. The group has dedicated itself to experimenting, researching and promoting Cape Verdean craftsmanship, in particular weaving, by researching traditional and popular knowledge – handed down by master artisans, such as Nhô Griga and Nhô Damásio – bases to foster the development of new craftsmen and artists. .

The link with the population is anchored in the origin of the CNAD. “The reason for this building is to belong to the people, to be close to them,” comments architect Eloisa Ramos. “In other words, we wanted to break down all possible barriers, allow people to move around here as they please, without distancing themselves. The result is this building which, although imposing, does not create distance”, she concludes. Eloisa, born on the island of Santo Antão, is one of the architects responsible for the rehabilitation of the old Casa Senador Vera-Cruz and the design of the new CNAD building, together with the Italian Moreno Castellano. Together they form the studio Ramos Castellano Arquitectos, based in Mindelo, which has in its portfolio Terra Lodge Hotel and Casa Celestina, both in the same city, and Aquiles Eco Hotel, in São Pedro.

For the CNAD project, they were inspired by a material common in the daily life of the Cape Verde Islands: the cans, or cylindrical metal or plastic drums. Almost all the goods that arrive on the islands, sent by relatives of residents who have gone to seek better economic conditions in other countries, arrive inside these drums. With 560,000 inhabitants living in the archipelago and nearly a million living outside, it is conceivable that the influx of drums is quite large.

After crossing the sea to bring goods from other continents, mainly from Europe and North America, but also from South America and Asia, these metal containers are recycled and integrated in various ways into the daily life of the inhabitants. It is not uncommon to find tin houses made with the metal plate of drums, or pots and other tools made from their parts. The uses are innumerable, and traces of drums can be found everywhere, especially in communities far from urban centers.

“The drums end up revealing a social, cultural and economic dimension of the country”, comments Irlando Ferreira, “and here they have been re-signified to constitute the second skin of the building”. The lid and the circular bottom of the drums were used to compose a mosaic that envelops the new building. Located about one meter from the glass facade that encloses the interior spaces, and accessible by a narrow service corridor, this skin functions as a screen against the strong Sahelian sun. An elaborate manual mechanism rotates the drums, controlling the level of brightness and insolation of the interiors. “There is no air conditioning, the environmental comfort systems are all passive,” reveals Eloisa.

What stands out the most, however, are the colors of the building. Each of the hundreds of lids is given a color, and within this palette is encoded a musical score composed by Cape Verdean multi-instrumentalist and conductor Vasco Martins. A color for each note (the intervals are also painted) and the rhythm of the facade is literally given by the music. In front of this partition, the Casa Senador Vera-Cruz, now without walls, opens onto the city. Between the buildings, a rectangular square provides additional space for the CNAD program and connects the side streets, serving as a shortcut through the urban fabric of Mindelo.

Open to the people, the city and the world, looking to the past and the present, the new CNAD stands in Mindelo like a dream for the future. “But not just any future, a future that brings us the past, being the diaspora and the island,” comments Abraão Anibal Barbosa Vicente, Minister of Culture and Creative Industries. Indeed, the National Center for Arts, Crafts and Design seeks to honor the institution’s past as a promoter of popular knowledge — the exhibition Cape Verdean Creation: Roads, organized jointly by Irlando Ferreira and Adélia Borges, bears witness to this. However, he avoids sinking into nostalgia and resolutely focuses on the development of young artisans and artists.

The realization of a project of this importance in a country of a little more than half a million inhabitants is an admirable achievement; program maintenance, in turn, will continue to be a challenge. “It’s a utopia,” adds Irlando.

But Cape Verdeans are no strangers to this: “I grew up listening to my father, who was a farmer, talk about waiting for the rain. You put the seed in the ground and wait for the water, and then you should have faith, because you believe the rain will fall. You have to believe to survive,” Eloisa told me. It hadn’t rained on the island of São Vicente for four years and the arid landscape bore witness to that. “Here we have an expression that says sow in the dustIrlando adds, “because the earth is so dry it has already turned to dust and even so you put the seed inside waiting for it to sprout”. I no longer knew if he was talking about the plantations in the countryside or the hard work of the institution he heads, but I sensed that once the seeds were sown, we all believed – myself included – that the harvest was finally possible.